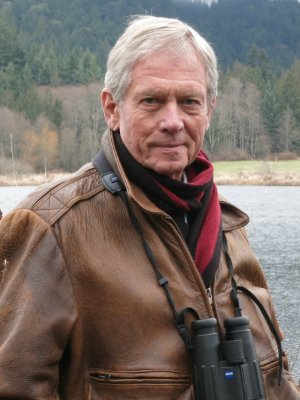 Bateman was always interested in art, but never intended to make a living from it. He was fascinated by the natural world in his childhood; he recorded the sightings of all of the birds in the area of his house in Toronto and did small paintings with birds in their habitats.[3] He found inspiration from the Group of Seven; later, he became interested in making abstract paintings of nature, strongly influenced by the work of Franz Kline.[4][5] It was not until the mid-1960s that he changed to his present style, realism.[3] In 1954, he graduated with a degree in geography from the Victoria College in the University of Toronto. Afterwards, he attended Ontario College of Education. Starting in 1957, Bateman travelled around the world for 14 months in a Land Rover with his friend J. Bristol Foster. As they made their way through Africa, India, Southeast Asia, and Australia, Bateman painted and sketched what he saw.

Bateman became a high school teacher of art and geography, and continued focusing his life on art and nature.[2] After two decades as a high school teacher, he became a full-time artist in 1976. A year later Mill Pond Press started making signed, limited edition prints of some of his paintings; over the years, these prints resulted in millions of dollars being raised for environmental causes. His work started to receive major recognition in the 1970s and 1980s. Robert Bateman's show in 1987, at the Smithsonian Institution in Washington, DC, drew a large crowd for a living artist.[6] In 1999, the Audubon Society of Canada declared Bateman one of the top 100 environmental proponents of the 20th century.[7]

Robert Bateman's realistic and evocative painting style reflects his deep understanding and appreciation for nature, featuring wildlife in its natural habitat and encouraging the viewer to closely observe the natural world.[8] He is a spokesman for many environmental and preservation issues, using his art to raise millions of dollars for these causes. The majority of Bateman's paintings are in acrylic on various media, and have been shown in major solo exhibitions around the world.[9] He has been the subject of several films and books including The Art of Robert Bateman (1981), The World of Robert Bateman (1985), An Artist in Nature (1990), Natural Worlds (1996), Thinking Like a Mountain (2000), Birds (2002), New Works, (2010), Life Sketches (2015), Bateman’s Canada (2017) as well as several children's books.

Robert Bateman Secondary School in Abbotsford, British Columbia, Robert Bateman High School (currently closed) in Burlington, Ontario, and Robert Bateman Public School, Ottawa, Ontario are named for him. He is an Honorary Director of the North American Native Plant Society, and has received numerous honours and awards, including Officer of the Order of Canada and fourteen honorary doctorates from institutions such as the University of Victoria, University of Toronto, Royal Roads University, and McGill University.[10]

A permanent home for his works can be found in the Inner Harbour of Victoria, BC. The Bateman Gallery houses the definitive collection of his works, and also includes a dynamic program of public events. It supports the Bateman Foundation, a not-for-profit organization whose mission is to promote the preservation and sustainability of the environment.

At 90, Robert continues a schedule of painting daily, public talks, and advocating nature.