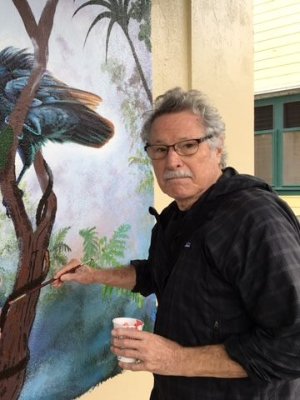 According to his family members, John Dawson was already drawing at the age of three. He can't recall a time when he didn't know that art would be his life. Although his love of the outdoors took a while longer to develop, both art and nature quickly became integral parts of his work. After graduation from the Art Center School in Los Angeles, Dawson "paid his dues" at the Phillips Ramsey Advertising Agency in San Diego before deciding to follow his muse to the Sawtooth Mountains of the Wood River Valley in Idaho. There he experienced some tough early freelance years. Only after trips to New York, Boston and Washington D.C. did Dawson secure enough support to make a living doing what he loved. Since then the artist has painted animals and birds for articles, posters, nature guides, first-class postage stamps and even zoo signs, for such prestigious establishments as the National Geographic, the Audubon Society, the National Park Service, the National Wildlife Federation and the U.S. Postal Service, among others. All his works display a meticulous attention to detail, supported by extensive research, interviews, personal experience in the field and eighteen-hour days at the drawing board. Although inspired by the remarkable terrain of the West, Dawson traded that environment for the tropical rain forests of Hawaii after a recent assignment in America's fiftieth state.

John D. Dawson was born and raised in San Diego, California. With the support of his class John was encouraged to follow his dreams of a career in art. John graduated from the Art Center School in Los Angeles, California which is now The Art Center College of Art and Design. John served in the Army Reserves while beginning his art career. Detroit, Michigan and automobile art kept him occupied for a year after college when he returned to San Diego and entered the world of advertising. John’s gift of illustration offered him full-time employment for sixteen years while completing free-lance illustration jobs on the side.

For the past thirty years John has completed major assignments for the United States Postal Service, National Geographic Society & National Geographic Magazine, National Wildlife Federation & Ranger Rick Magazine, Audubon Society and Audubon Magazine, United Nations, University of Hawaii at Hilo, Imiloa Astronomy Center among many other clients including private commissions. During the most recent twelve years John has worked continuously with the USPS. The “Nature in America” series of twelve individual panes depicting various bioms across the US is one of his proudest accomplishments.

Today one can find Dawson’s artwork included within the maps provided to visitors to Hawaii Volcanoes National Park as well as the stunning educational display inside the Kilauea Visitor Center. One of Dawson’s proudest accomplishments is theNature in America stamp series which includes a lush depiction of The Hawaiian Rainforest created for theUnited States Postal Service. Dawson’s resume includes many major assignments for theNational Geographic Society,National Wildlife Federation,Audubon Society,United Nationsand the‘Imiloa Astronomy Center, and has appeared in additional national publications. With decades of experience, Dawson’s work continues to captivate audiences. John and his wife Kathleen have lived in Hilo for over twenty two years.