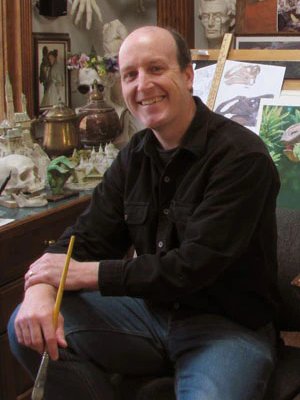 Born in California in 1958, the son of a mechanical engineer, he taught himself to draw by reading books about the illustrators Norman Rockwell and Howard Pyle. He studied archaeology at the University of California at Berkeley, receiving a degree in anthropology with Phi Beta Kappa honors.

Prompted by a cross-country adventure on freight trains, he coauthored The Artist’s Guide to Sketching in 1982. During the same period, he worked as a background painter for the animated film Fire and Ice, co-produced by Ralph Bakshi and Frank Frazetta.

His freelance illustration career began with paperback book covers, where he developed his characteristic realistic renderings of fantastic scenes, often using posed models and handmade maquettes for reference. His has worked on more than a dozen assignments for National Geographic magazine, painting reconstructions of Moche, Kushite, and Etruscan civilizations.

The inspiration that came from researching these scenes of ancient life led to a series of lost world paintings, including ”Dinosaur Parade” and ”Waterfall City.” With the encouragement of retired publishers Ian and Betty Ballantine, he committed two years’ time to writing and illustrating Dinotopia: A Land Apart from Time, which was published in 1992.

Solo exhibitions of his artwork have been presented at The Smithsonian Institution, The Norman Rockwell Museum, The Norton Museum of Art, The Delaware Art Museum, and other venues. He is a popular lecturer at art schools, movie studios and game companies, and he teaches occasional workshops. His  book, Color and Light: A Guide for the Realist Painter (2010) was Amazon’s #1 bestselling book on painting for over 52 weeks and is based on his daily blog