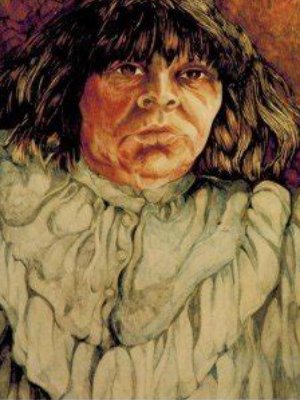 Ann was born in Winlaw, British Columbia on February 14, 1947. She was raised in the Slocan Valley community as one of five children of George Alfred Swanson and Emma Winnifred Swanson (Lightfoot).

In 1964, after finishing high school, Ann studied fine arts at the Kootenay School of Art, in Nelson. This is where she met her future husband, Harald Alphons Gross. After they both finished art school in 1967 they were married.

Ann moved to Haida Gwaii in the late 1960s where she taught junior high school art. After Haida Gwaii she spent several years in Victoria, where she worked in the History Department of the Royal Provincial Museum and did freelance illustrations for various B.C. government ministries. In 1979 Ann relocated back to the Slocan Valley and dedicated herself to her art. In 1984 she opened her gallery, “Place in the Forest” in Winlaw.

Ann sculpted in clay and painted primarily with fibre-tipped water based pens. Her work is in collections in the West Kootenays, Victoria, Vancouver, Whitehorse, Calgary, Edmonton, Toronto and Australia. In 1982, she won an Award for Artistic Excellence in the Kootenay Boundary Jury show, where adjudicator Jack Shadbolt described her paintings as “genuinely intriguing. . . with a haunting tawniness.”

Four paintings were chosen for exhibit in Vancouver at the Robson Media Centre’s First Annual Jury Show in 1984. She also illustrated a children’s book “Dusty” for Solstice Books and contributed many drawings for local publications, including “Images”, the Kootenay women’s paper.

She sculpted, painted and did line drawings until her health started to decline a few years ago. She was a strong supporter of the arts, women’s and community groups.